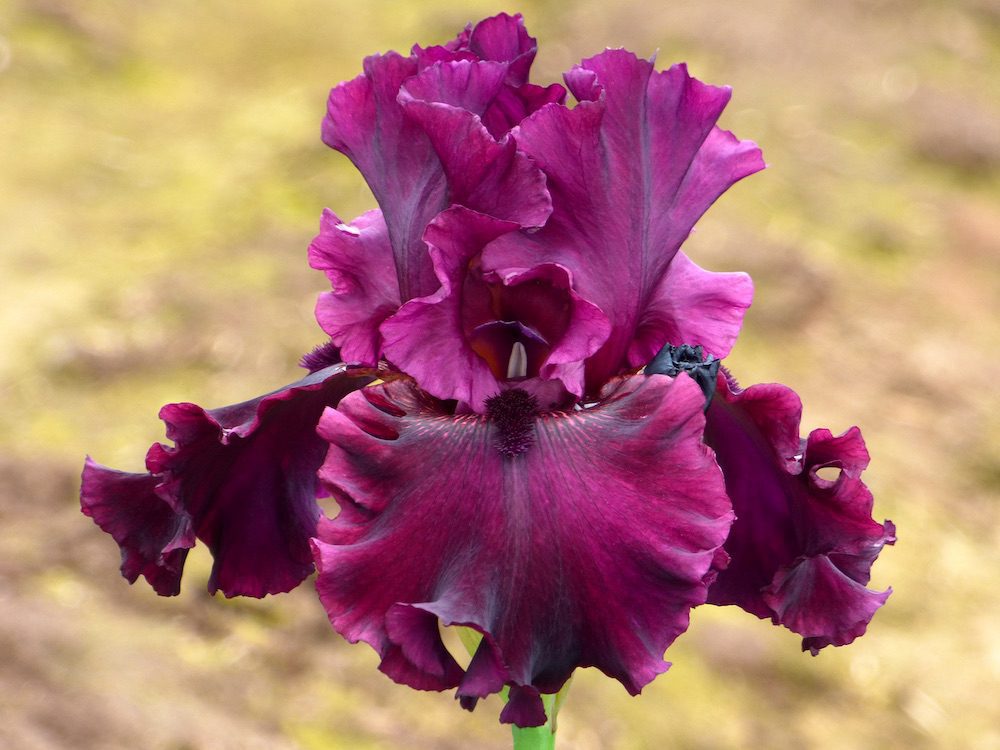 “The beauty of their colors and the unusual shape of their flowers inspired Van Gogh and Monet. Whether in the gardens of our grandmothers or in the most contemporary gardens, they have their place. Once planted, they are carefree!”

At the Château de Vullierens, Doreen Bovet started almost 70 years ago, a collection unique in Europe. American, wife of one of the chatelains, she had a passion for irises. She started her collection in 1950: her first 5 irises came from Schreiner, a famous hybridizer of Swiss origin, settled across the Atlantic. Five years later, she opened her garden to the public: we marvel at this already exceptional collection of irises. For more than 60 years, it has continued to grow, and today there are more than 400 varieties presented and cultivated in a park of more than 2 hectares.

Everybody knows their huge flowers with their sophisticated, frilly shape, like no other. The wavy petals, three in number, stand upright in the center of the domed corolla; the richly colored sepals (also 3) also curve downward or spread almost horizontally in the newest varieties. The latter bear the beard: this colored hair attracts pollinating insects to the sexual organs of the corolla, well hidden between petals and sepals. This is where their Latin name comes from: Iris barbata (sometimes also called Iris germanica). They are also sometimes called “bearded iris”. Their leaves are sword-shaped, very robust, long and bluish-green. Some are scented: vanilla, citrus, orange blossom…

In addition to these, there are the Siberian iris (Iris sibirica) with its slender flower stems bearing smaller, simpler flowers than the previous irises, but very graceful. If blue is their classic color, they also have yellow, white and purple on their corollas depending on the variety.

The height of the irises conditions their location in your garden. The irises are divided into five groups:

Iris are so popular that specialists have created and are still creating thousands of different varieties of irises, with new ones appearing every year. The most recent are more flowering and more robust. The flowers are larger and longer lasting and are carried by sturdy stems, which are slightly shorter – around 85 cm instead of 90 cm for older varieties. They are less sensitive to lodging and keep the flowers clearly visible.

All the irises in our collection are available for sale on site (via the order form) or in our online store.

Your criterion: the color

Not for nothing do they bear the name of the messenger of the gods of Olympus. Her multicolored scarf gives birth to rainbows. The irises come in almost any color in a thousand shades. Blue and purple are the traditional colors, but the palette has been enriched for many years with yellow, orange, black, red, brown … The bicolors are increasingly numerous. The contrast of the two colors gives more relief to the flower. Warm tones – honey, rust, mahogany, purple… – and subtle shades – salmon, peach, cream… – are in fashion. We are still looking for the perfect red but already some varieties are approaching it like ‘Rustler’ or ‘Dynamite’.

Your criterion: a long flowering period

If the flowering of the irises is stunning, it lasts, for variety, only about three weeks in spring, when the plant is well established. By combining the various iris families in your garden, you can therefore enjoy a continuous flowering from mid-April to mid-June, for two months. And that’s not all!  In recent years, varieties of irises have emerged: they bloom like the others in spring and again at the end of summer, during the month of August with a little care to encourage this second flowering. That’s enough to satisfy the amateurs of long flowering!

Well implanted, irises can bloom in your garden for almost 20 years in a row.

Summer, between the end of June and the end of September, is the best season to plant rhizomatous irises. In milder regions, irises can still be planted in October. The important thing is that they have time to root well before winter. The earlier they are planted, the better, especially in cold regions. It is possible to plant irises up to an altitude of about 1000m. However, they will flower later than in the lowlands. In windy regions it is recommended to stake the flower spikes so that they do not fall down or break.

They can be pulled up very well and are sold as bare roots. Each plant includes a portion of well-swollen rhizome with fine peripheral roots and the base of a fan-shaped tuft of leaves. An iris planted in summer will flower the following spring. The bigger the rhizome is, the more lateral buds it has (gardeners talk about eyes), the more generous the first flowering will be.

The irises like sun and heat. Their future location should receive sunlight for at least 4 to 5 hours. If the place is too shady, they will grow but will not bloom or very little. Beware of the shade provided by large trees.

They will thrive in well-drained, even dry, neutral or calcareous soils. If you have heavy soil, plant your irises on small mounds and do not hesitate to add coarse sand or humus to lighten the soil. But mix it well with the existing soil. The rhizome will not tolerate direct contact with the compost.

Loosen the soil in depth, at least 20 cm: this will promote good drainage. Iris rhizomes do not tolerate humidity well. Careful weeding, particularly to eliminate perennial weeds (buttercup, bindweed, etc.): once the irises are in place, it is not easy to weed between their rhizomes. Dig a shallow, wide hole. Lay the rhizome flat, the leafy part against one of the edges of the hole. Spread the thinner roots, taking up as much space as possible. Check the depth, the top of the rhizome should be flush with the soil surface after planting. Do not bury the base of the leaves. Pack the soil well around the rhizome by hand and water abundantly. Leave a space of 25 to 30 cm between each iris. The flowering peak is around the third year after planting.

Only dwarf irises are suitable for pot planting. The others would not survive in such a small space. Choose a large enough pot, 25 to 30 cm in diameter, heavy enough to make your pot stable. Terracotta is ideal because it is porous and avoids excess moisture around the roots. For the same reason, use gravel as a drainage layer, at least 5 to 6 cm thick. Mix equal parts potting soil and good garden soil. Fill up to about 5 cm below the edge. Place your iris a little off-center in the pot and especially let the rhizome on the surface. Divide when the rhizomes occupy the entire surface of the pot. It is the ideal plant for window sills crushed by the sun or for south-facing balconies.

The irises are robust and do not require much maintenance. Keep the floor airy around your irises. Operate delicately so as not to damage the rhizomes and their fine roots. After flowering, cut the flower stems as low as possible. Remove damaged leaves. Although this is not a requirement, from the second year onwards, you can use a special flowering plant fertilizer. Divide the recommended dose in two: bring the first part in March and the second part in June, after flowering. Nitrogenous fertilizers are to be banned: they would encourage an excessive growth of the foliage to the detriment of the flowers. Keep a light hand on the watering side. Just after planting keep the soil moist but not excessively so until the plant starts to grow again (new leaves). Then space the watering every 3 weeks. Afterwards, water only during the summer when it is very dry. Do not mulch: this will cause excessive moisture around the rhizome.

For your irises to last a long time, they should be divided every 3 to 4 years just after flowering. When the rhizomes are too dense, the irises flower less and their flowers are smaller. Surround the iris tuft with a spade fork by planting its teeth vertically 20 cm from the iris tuft all around. Lever on the handle to remove the root ball from the soil. With a sharpened rag or by hand, separate the rhizomes. Keep the rhizomes around the edges: they are usually the largest and youngest. Replant them immediately. Cut back the fine roots a few centimetres, remove dry, yellowed or stained leaves, and cut off the leaves 12 to 15 cm above the rhizome.